For any baby, hip dysplasia is a risk faced, especially in the very early months of life. Unfortunately, the resulting ailments are full-blown at a later stage in life.

Therefore, apart from buying the best products (baby carriers that prevent deformity in the hip sockets), some other practices are essential to consider, and they are available in this article.

What Does “Hip Healthy” Mean?

Hip healthy is a term that describes the best way to carry infants while avoiding hip dysplasia or dislocation.

Thus, swaddling your baby with a support such as a wrap or a carrier in a way that perfectly wraps the baby’s bottom and thigh and spread apart the hips and knees bent with enough space for flexibility is a hip-healthy position, similar to a jockey position or a spread squat position.

What is Hip Dysplasia?

Hip dislocation or hip dysplasia refers to the improper formation of the ball and socket joint, which is when the hip socket does not cover the ball of the femur fully, this most times, results in dislocation.

According to the International Hip Dysplasia Institute, Hip dislocation is often noticeable in adults and children. However, most hip dysplasia in adults must have begun during birth or in the first six months after birth due to a lack of healthy hip development.

After the first few months or six months of the infant, poor hip positioning might not be possible as the hip ligaments must have been strong with good hip positioning.

What Are The Signs Of Hip Dysplasia

Hip Dysplasia or dislocation varies based on the age bracket.

For babies of around six months or babies in general, a parent might notice the following signs:

While in adults, frequent hip problems seen are:

Can a Baby Carrier Cause Hip Dysplasia?

At times, baby slings or baby carriers for hip dysplasia affect the healthy hip positioning or hip development of babies.

According to the International Hip Dysplasia Institute, using baby carriers or baby slings that compresses a baby’s legs together could lead to hip dysplasia.

Hence, it was always advisable for parents babywearing infants to make sure the baby’s legs are not folded but wrapped around the parent.

Also, the positioning should be in a spread squat position.

Hip dysplasia in infants is often called developmental dysplasia of the hip. In adults, it is called socket or acetabular dysplasia.

Several months after the birth of an infant, the joints begin to stretch out naturally, and the ball is loose within the socket because of the soft cartilage of the socket edges and flexibility of the baby.

In a situation where the hip is stretched out of position very early, it could result in the ball gradually slipping out of the socket, which causes hip dislocation.

At other times, the ball could permanently deform the edge of the socket.

Though, not noticeable as it is not painful and only shows up in the body when the baby can walk properly.

For a healthy hip, baby carrying should be in the M position or natural position.

In this position, the thigh’s support is adequate, the hips and knees bent, the knees a bit higher than the bottom of the baby, and the legs spread apart around the parent’s body.

Baby Hip Dysplasia: How to Avoid it

Avoid using baby carriers or products that are not comfortable or that make you swaddle the legs and thighs of your baby together or straight out.

Hence, while using a baby carrier, carry your baby in the M position.

Parents could also seek medical advice regularly from a pediatrician to prevent the risk of hip dysplasia.

What Makes a Baby Carrier Safe and Hip Healthy?

While baby carriers might not be safe for infants between 1-6 months of age due to lack of proper head control, it is safe for babywearing infants above six months.

Apart from the baby carrier fulfilling the ‘M’ position, an appropriate baby carrier should allow the legs, head, and hands of babies to stretch out naturally without any hassle.

Besides, the baby carrier should come with an instructional guide, not be tight the baby, and satisfies European or US standards.

Aside from using the right hip carrier for infants, a regular visit to the hospital, especially during the first few months after birth, is essential.

Parents should also adhere strictly to the doctor’s opinion, as most Hip dysplasia patients have this hip socket challenge from childhood.

Is it safe to carry a baby facing out?

When babywearing as a parent, it’s appropriate to carry your baby on your back or in front of you, facing you the first few months after birth.

However, after a few months of babywearing a baby, you might notice some signals or agitations from the baby to see the surrounding environment, which is normal.

While you can permit the baby to face out, the main factor is, does the baby have good neck and head control?

Besides, while carrying your baby with a carrier facing out, ensure the environment is safe and friendly.

Can Improper Positioning Cause Hip Dysplasia?

Yes. International Hip Dysplasia Institute reveals that babywearing infants with a tight product or wrapping their legs tightly and for a lengthy period is inappropriate and could lead to hip dysplasia.

Therefore, a healthy hip positioning involves carrying your baby in the natural position, the M positioning.

Thus, in this natural position, the thigh is adequately supported, the hips and knees bent, the knees a bit higher than the bottom of the baby, and the legs spread apart around the parent’s body.

Additionally, if there is a family history of hip dysplasia, practice the use of accurate positioning.

Are baby Jumpers Bad for Hips?

A jumper is a piece of baby equipment that thrills babies and avails parents the opportunity to do house chores without babywearing your baby.

However, many wonder if this is detrimental to the hip development of babies.

The fabric seat of jumpers does not aid the hip development of babies. But places the baby’s hips in awkward positions, which might result in straining the hip joint or even lead to hip dysplasia.

At other times, placing your baby in the jumper makes the baby stand on his toes for a lengthy period, which could result in tightness of the calf muscles.

Also, much bouncing of the baby could lead to straining the hip joints. 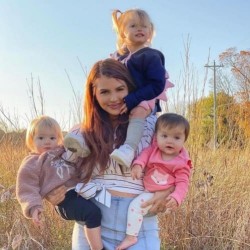 I’m Sophie Turner, the creator behind this site. I’m a blogger, wife, and blessed with three children—just a mom who really loves people and who created them a billboard for abundant grace. Facebook Twitter Pinterest

...
As an Amazon Associate I earn from qualifying purchases.